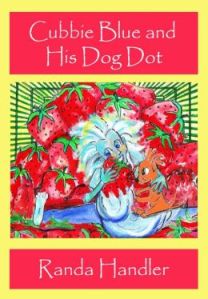 Opening: “In the mists of Cylon, the oldest Antarctic iceberg, was the enchanted land of Baltar, with diamond-faceted ice stalactites and stalagmites that twinkled in any light.  The sky-blue-skinned Baltarians were always happy, doing cartwheels as they walked and giggling when they talked.  They were only a few inches tall but big in knowledge.”

Synopsis:  Cubbie Blue and His Dog Dot is a story about Cobalt, a 150-year-old child, who stands three inches tall, is blue and has a long blue beard.  “Cubbie” has a family and a miniscule dog, Dot, who has multiple tails.  They live in a peaceful nation of Baltar, which is on an iceberg in Antarctica.  The Baltarians communicate telepathically.  There is another nation, Aryon, which wants to capture Baltar.  Therefore, Baltar has a protective energy field around it and all Baltarians are warned not to leave.   While playing in his father’s transport vehicle,  Cubbie” pushes too many buttons and finds himself far away from Baltar and in a land of people who are friendly, but are giants.  Cubbie finds an unlikely friendship with three multi-racial boys, Brian, Chris and Derek, who find their new friend quite unique.  Cubbie can read minds, disappear, and create magical transport bubbles to explore his new environment (cities, mountains and rivers) with his friends.  They have a lot to learn about each other, including right and wrong, tolerance, equality and problem-solving.

Why I like this book:  Author Randa Handler has written a magical and quirky story that will not only entertain children, but will teach them about diversity, problem solving, multicultural differences, and social justice issues.  In fact today marks the UN World Day of Social Justice.  To celebrate, Randa Handler and Premier Digital Publishing are giving away the first book in her new eBook series that promotes diversity, tolerance and equality.   Says Handler, “If children are taught early on that being different is cool, the world will be a better place to live in.”   This is an excellent book to encourage kids to use their imaginations.  Her illustrations are bold, funny and colorful.  Cubbie Blue can be downloaded for free by “liking” Premier Digital Publishing’s Facebook page from Feb. 20-28, 2013.   You may visit Randa Handler at her website and view her other books in the Cubbie Series and another book If I Were King.  A portion of the proceeds from the sale of her first three books will go to the Spirit Bear Youth Coalition.

This book has been provided to me free of charge by the publisher in exchange for an honest review of the work.

12 thoughts on “Cubbie Blue and His Dog Dot”