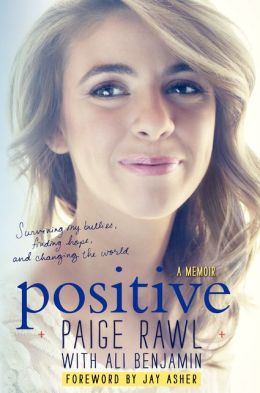 Book Synopsis: Cheerleader, soccer player, honor roll student. One of the good kids at her middle school. Then on an unremarkable day, Paige disclosed the one thing that made her “different”: her HIV-positive status. Within hours, the bullying began.  They called her PAIDS. Left cruel notes on her locker. Talked in whispers about her and mocked her openly. She turned to school administrators for help. Instead of assisting her, they ignored her urgent pleas…and told her to stop the drama. She had never felt more alone. One night, desperate for escape, Paige found herself in front of the medicine cabinet, staring at a bottle of sleeping pills. That could have been the end of her story. Instead, it was only the beginning.

Why I like this book: Paige Rawl and Ali Benjamin have written a realistic, raw, brave and powerful memoir about a teen living with HIV since birth. Although Paige is stable on medications, HIV is such a sensitive subject and tough diagnosis for a teen to deal with — especially when her best friend betrays her. Once Paige’s secret spreads like wildfire at school, the bullying begins. This is one of the best memoirs I’ve read this year. It is a real page turner that I could not put down. Although what happens to Paige is heartbreaking, her courage to reclaim herself and move forward is inspiring. You will find yourself rooting for Paige as she finds a voice she didn’t know she had. Her memoir is written in short chapters and is well-paced. Her voice is strong and determined. In sharing her story, she encourages other teens to find their inner strength in the midst of any storm. And her experience has made a difference for others.

Resources: There is extensive information and facts about HIV, bullying and suicide.  She shares information on programs for kids who are touched by HIV/AIDS, a National Suicide Prevention Lifeline and programs to stop bullying.