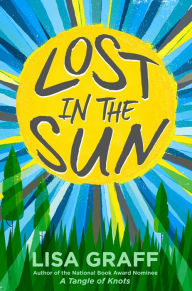 Lost in the Sun

Suitable for Ages: 10 and up

Book Jacket Synopsis: Everyone says that middle school is awful, but Trent knows nothing could be worse than the year he had in fifth grade, when he accidentally hit Jared Richards in the chest with a hockey puck out on Cedar Lake. (Who knew that Jared had a heart defect? And that one little hockey puck could be deadly?) Trent’s pretty positive his entire town hates him now, and can’t blame them. So for Trent, middle school feels like a fresh start. He may even join the baseball team, if he wants to.

If only Trent could make the fresh start happen. It isn’t until Trent gets caught up in the whirlwind that is Fallon Little — the girl with the mysterious scar across her face — that things begin to change. Because fresh starts aren’t always easy. Even in baseball, when a fly ball get lost in the sun, you have to remember to shift your position to find it.

Lisa Graff has written a compelling coming of age story about Trent, a sixth-grader who blames himself for Jared’s death, is wracked with guilt and doesn’t know how to handle the nightmares from the accident and the rage that burns inside him.

This novel speaks powerfully about deep emotional pain. The plot is complex, realistic and skillfully executed. It digs deeply into many themes that include recovery from a tragedy, a father’s remarriage and a new baby, the relationships between three brothers who play pranks on each other, and Trent’s friendship with Fallon, who also shares a different kind of scar.

The first-person narration by Trent is raw and honest. The characters are believable, vulnerable and memorable. It’s hard not to become attached to the characters in this story. Trent is sarcastic, moody, angry, sensitive and funny. Fallon is taunted by other kids at school about her scar, but is upbeat, wise and strives to be herself. In a way she is fragile like Trent, but her demeanor is opposite. They bond through watching baseball movies and searching for “continuity errors” in the movies. Trent and Fallon are an unlikely pairing, but they support each other on their journey towards healing in unusual ways. Trent’s brothers, Aaron and Doug, are pranksters and provide comic relief.

Although Graff’s novel is written for middle graders, young adults will be drawn to this authentic and emotionally driven story from a boy’s perspective. Visit Lisa Graff at her website.