Tis the season… I wanted to share some of my favorite holiday books that have found a permanent home on my bookshelf! Warmest wishes to all of my followers for a joyful holiday season! I will return January 6 with a Perfect Picture Book Friday review.

Oskar and the Eight Blessings

Oskar’s mother and father believed in the power of blessings. So did Oskar…until the Night of Broken Glass. His parents put him on a ship to America. He had nothing but an address and a photo of a woman he didn’t know — “It’s your Aunt Esther.” — and his father’s last words to him: “Oskar, even in bad times, people can be good. You have to look for the blessings.” Follow Oskar as he makes his long walk through New York City to his aunt’s home.

The Carpenter’s Gift: A Christmas Tale About The Rockefeller Center Tree

Henry’s father comes up with an idea to make money the day before Christmas. He borrows a truck, and he and Henry head for a grove of spruce trees.  They cut them down and drive to New York City to sell them as Christmas trees.  They find the perfect spot near the Rockefeller construction site in Manhattan.  The workers help them unload the trees.  Before heading home, his father decides to give the last trees to Frank and his construction workers.  Frank takes the tallest tree and the men decorate it with cranberries, pinecones and tin cans — the first Rockefeller Christmas tree.  Henry makes a star out of newspaper.  Before he hangs it on a tree, Henry makes a special wish.  He takes a pine cone from the tree to remember that magical day. 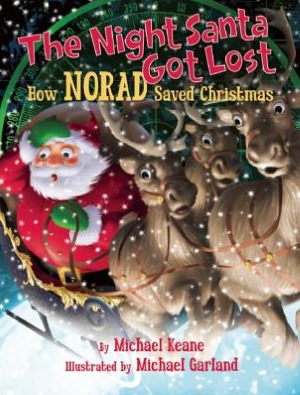 The Night Santa Got Lost: How NORAD Saved the Day

Twas the night before Christmas at NORAD’s home base/ Not an airman was stirring, each one was in place/Ready and waiting for the very first sight/Of good old St. Nick on his Christmas Eve flight.”  Every year the North American Aerospace Defense Command (NORAD) tracks Santa as he delivers gifts to children worldwide.  But, Santa and his reindeer get lost in a blizzard.  He disappears from their radar.  Will NORAD be able to find Santa with their high-tech equipment and help Santa deliver presents to the children in the world? Children will love the suspense and can go to the NORAD Santa’s Tracker site on December 24 to join in the fun this year.

Twas Nochebuena: A Christmas Story in English and Spanish

‘Twas Nochebuena / and all through our casa, / every creature was kneading tamale masa. / For one of our holiday tradiciones, / is making tamales — / not one, but montones!”

It’s Christmas Eve, and you’re invited to a Nochebuena celebration! Follow a family as they prepare to host a night filled with laugher; love and Latino tradition. Make tasty tamales and hang colorful adornos (decorations) on the walls. Gather to sing festive canciones (songs) while sipping champurrado (hot chocolate).  After the midnight feast has been served and the last gifts have been unwrapped, it’s time to cheer, “Feliz Navidad and to all a good night!”

The Smallest Gift of Christmas

When Christmas morning arrives, Roland races to the living room and finds the smallest gift ever with his name on it.  He closes his eyes and wishes for a bigger gift.  Not happy, he wishes again and again. Larger gifts magically appear, but they don’t satisfy Roland.  Frustrated, this feisty and determined boy sets off in a rocket to search the universe for the biggest gift. Looking back at earth, Roland realizes what he wants most.

Anja, who lives in the arctic region, dreams of being one of Santa’s elves. She watches the position of the North Star at night and memorizes the great map  at school as she prepares for her trip. Leaving behind presents and a note for her family, she bundles in Nordic clothing and straps on her skis so she can travel through the deep snow. Along the way, a bird, a horse, a musk ox, a polar bear and a reindeer help Anja on her journey to find Santa Claus at the North Pole.

Oh, What a Christmas

Everything started off the same magical way Christmas always does.  Santa and his reindeer took off from the North Pole, loaded with presents for all the boys and girls around the world.  Santa called out to his reindeer as the sleigh raced across the starry sky.  Then POP! RIP! S-T-R-E-T-C-H!  The harness that attached the reindeer to Santa’s sleigh was tearing.  With one final BOING! it snapped in two!  Ho! Ho! –oh, no!” The reindeer fly off into the night.  Santa and his sleigh full of toys plummet to the earth and crash into the side of a barn.  A sleepy sheep peers from the barn…along with  a pig, a goat, two cows,  a horse and a hound dog.  Santa’s eyes twinkle as he surveys the barnyard animals.  Maybe he has found a solution so the children of the world won’t be disappointed.

May you be filled with the peace of the season and have a blessed New Year!