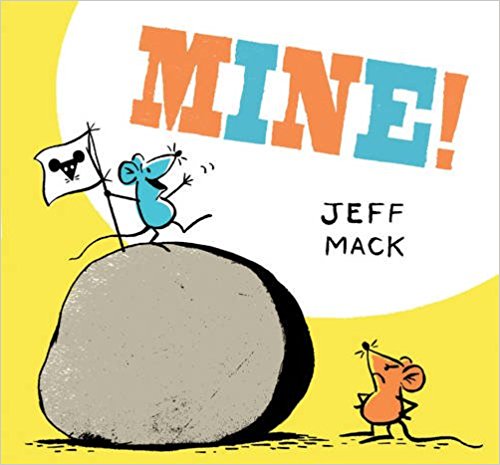 “Mine!” This one word is powerful when you add two mice, who find a large rock and each one declares ownership. A battle ensues with the two trying to outsmart each other by dangling tantalizing morsels of cheese from a fishing pole and bearing other gifts. As the stakes get higher for who will own the rock, a dump truck backs up with a load rocks to knock one of the mice off the rock. One victor is momentarily triumphant, while the other builds a rock fortress around his rock. A wrecking ball brings the rock wall tumbling down. In the final battle, the two mice both stand on top of the rock facing each other with fists raised and yelling “Mine! Mine! Mine!” at each other. And then something happens and they both are in for a big surprise!

This is the first time I’ve reviewed a picture book with only one word. Jeff Mack’s zany story is highly entertaining with great pacing. His bold and  colorful illustrations are expressive and show the building tension between the two mice, one blue and the other orange, as they try to outsmart each other. You have to love that cover!

This is a perfect read-aloud story for young children who are learning to share.  It is a clever book about sibling rivalry and one that will elicit giggles from children. It’s a great book for about learning how to solve problems. This book belongs in every pre-school classroom.

Jeff Mack has drawn since early childhood, when he would illustrate his own stories, particularly about monsters, robots and pinball machines. He has illustrated more than 30 children’s books, including Ah Ha! and Good News, Bad News, both of which he also authored. Visit Jeff Mack at his website.

** I won Mine! from Sue Morris’ website, Kid Lit Reviews. Check out her honest and objective reviews of the most recent book releases.