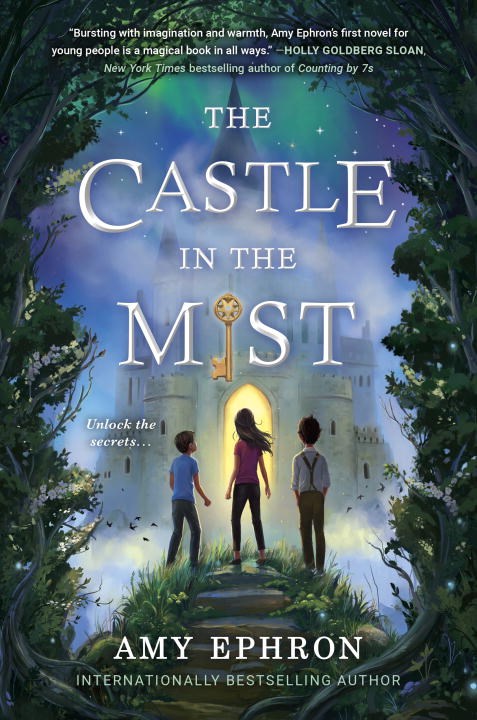 The Castle in the Mist

Tess and her brother, Max, are sent for the summer to their aunt’s sleepy village in the English countryside, where excitement is as rare as a good wifi signal. So when Tess stumbles upon an old brass key that unlocks an ornately carved gate, attached to a strangely invisible wall, she jumps at the chance for adventure. And the world beyond the gate doesn’t disappoint. She finds rose gardens, a maze made of hedges, and a boy named William who is just as lonely as she is.

But at William’s castle, strange things begin to happen. Carnival games are paid for in wishes, dreams seem to come alive, and then there’s William’s eerie warning: Beware of the hawthorn trees. A warning that chills Tess to the bone.

In a magical, fantasy world that blurs the line between reality and imagination, readers are left to wonder exactly what they’d wish for if wishes could come true. Perfect for fans of Half Magic and The Secret Garden—and for anyone who’s ever wondered if magic is real.

Amy Ephron’s world building in this fantasy is magical and readers will feel like they’re in the middle of the action. I was enchanted with the idea of a huge castle hidden in the mist behind an invisible wall that can’t be penetrated. The grounds are large and beautiful with a pond with swans, a hedge maze, an odd sculpture garden, a carousel and stables.

Tess and Max are the grounding factors in the fantasy. They are separated from their parents, having finished boarding school in Switzerland and then sent to their Aunt Evie’s for the summer. Like most siblings they have their squabbles, but they have a strong bond and depend upon one another. William is the lonely and mysterious boy who lives at the castle. He warns Tess from the start to stay away from the Hawthorne trees, but never explains why. Tess and Max wonder about William’s identity and the odd things that happen at the castle. William introduces the siblings to a world where they question the real from the imagined and wonder “did that just happen?”

The entire story is an enjoyable fantasy from beginning to end. The plot is imaginative and fast-paced. There are unexpected twists, like the scenes surrounding the carousel and the overlapping blue, blood and super moons that occur together that influence the story. My only wish was that the book had been a little longer. The book ends with the potential for a sequel. However, Ephron has written a companion book, Carnival Magic, with Tess and Max returning in a new summer adventure with Aunt Evie. It will be released May 1, 2018.

Amy Ephron is the internationally bestselling author of several books written for adults, including the award-winning A  Cup of Tea. She is also a film producer, an essayist, and a contributor to Vogue and Vogue.com. The Castle in the Mist is her first book for children. You can visit Amy at her website.

For the next few months Greg Pattridge will be hosting Marvelous Middle Grade Monday posts on his wonderful Always in the Middle website. Author Shannon Messenger will be on a whirlwind tour promoting her sixth book, Nightfall, in the Keeper of the Lost Cities series, which will be released November 7. Thank you Greg!

22 thoughts on “The Castle in the Mist by Amy Ephron”